I’ve recently been on a family holiday to the far South-West of Cornwall, scouting out the area that I’ll soon be spending my time studying in. The Lizard peninsula may just be my new favourite place! It is a naturalists’ heaven, with lowland heathland, coastal grassland, and rocky beaches all available in abundance. The mixture of habitats, sitting above unique ultra-basic Serpentine rock in a Subtropical climate means that the peninsula has rare and/or endemic plants in what seems like abundance! (The subtropical climate in Cornwall may have positive implications for local farming, but invasive species such as Hottentot-fig must be kept a close eye on. See the link below.)

First up, the clifftops. We started from Lizard point itself, and walked West along the coastal path. It didn’t take long before I spotted the first interesting plant (and pan-species tick!) of the day: the dainty Autumn Squill (Scilla autumnalis).

This beautiful little plant is a member of the Lily family, and is almost confined to short and dry coastal grassland in the extreme South-west of England. Autumn Squill is unusual in that the leaves don’t appear until the plant has finished flowering, usually in late September. I hope to come back to the lizard to catch up with the closely related Spring Squill (Scilla verna) in late April next year.

Possibly being distracted by the stunning scenery, I didn’t find any other particularly rare plants for the rest of our walk. Though I did manage to find multiple colonies of the ant Tetramorium caespitum under stones in the driest areas. This small, dark ant is recognised by having two waists, short spines on the back of the thorax, raised sides to the clypeus, and a fairly square head. (I vow to create a pictorial key to ants in the not too distant future!). Another interesting thermophilic insect was the Lesser Cockroach (Ectobius panzeri), phone-microscoped below.

Later that day, we drove slightly East, and joined the coastal path again in the picturesque village of Cadgwith. It was a steep climb out of the village, but it wasn’t long before we reached a collapsed cove known as the Devil’s Frying Pan. I’m sure there would’ve been some interesting things to find down there, but I couldn’t find an easy way down! (It’s bigger than it looks).

Only fifty yards or so further along the path, there was another amazing sight, but on a much smaller scale. A small matt of Fringed Rupturewort (Herniaria ciliolata ciliolata)! This understated plant is a relative of the Chickweeds and Campions, and is probably the rarest plant that I’ve ever seen. The British subspecies is an endemic, and only found on the Lizard, Jersey and Guernsey. It was growing right across the path, rooted to small pieces of soil wedged into a lump of rock. Here it is in all its glory!

It was a very successful day overall, and made a healthy contribution to my pan-species list. Other highlights included Storm-Petrel from a brief mid-afternoon seawatch, and the Reed Beetle Donacia marginata on a giant Gunnera seedling, near a cliff-side reedbed!

I couldn’t wait to get back and explore the heathland, so two days later we visited Goonhilly Downs, where I hoped to find to find the rare Cornish Heath (Erica vagans), restricted in the UK to (you guessed it) the Lizard peninsula. I had read that Cornish Heath could be locally abundant, but I wasn’t quite prepared for the scale of its abundance when I arrived! The moment we had turned into the car park, we were surrounded by the stuff! 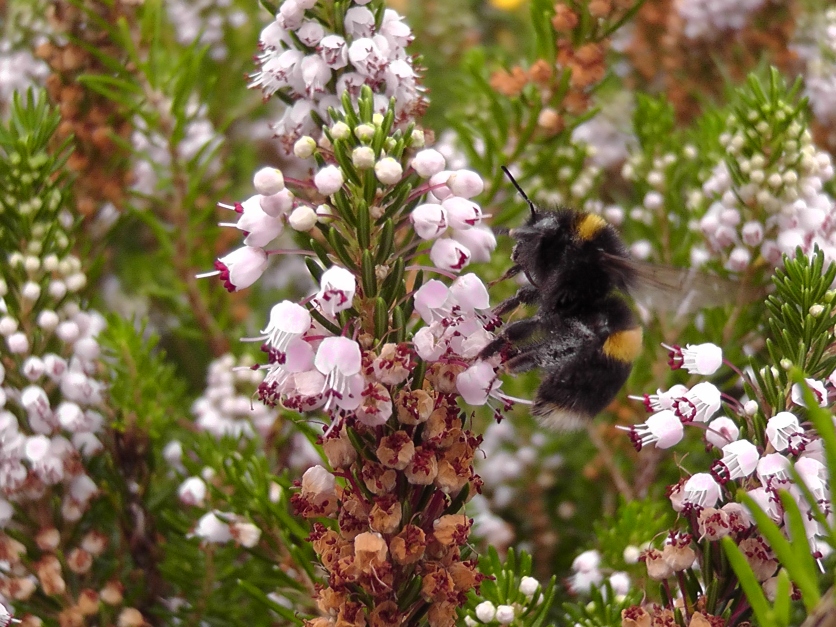 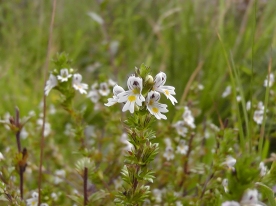 My day up to this point had suffered from a lack of invertebrates, so I decided that stones needed turning! After several slabs without reward, one particularly promising embedded stone yielded a few large yellow Lasius ants. Anybody who’s learnt their ants will know that large yellow Lasius means ‘very hard to find and/or rare’. Unfortunately, two of the ants disappeared down a tiny hole, but I managed to take one specimen for identification. Something else that large yellow Lasius means is ‘very hard to identify’, so having just one worker is not ideal. There are four similar species in the UK, one of which (L.mixtus) has a record from Goonhilly Downs, and another (L.umbratus) from other sites in Cornwall. Both myself and Brian Eversham have looked at this specimen, and the only conclusion we’ve come to is that it almost certainly isn’t L.mixtus, and that we need a larger reference collection to refer to! In my opinion, it’s a 50/50 chance between L.umbratus, and the rarer L.meridionalis (which would be new to Cornwall, and in a non-ideal habitat).

In conclusion, the Lizard peninsula is stuffed with amazing habitats, which play host to amazing species. I’m looking forward to getting back there again before too long, and hopefully picking up a few more ants (I know where that stone is!). 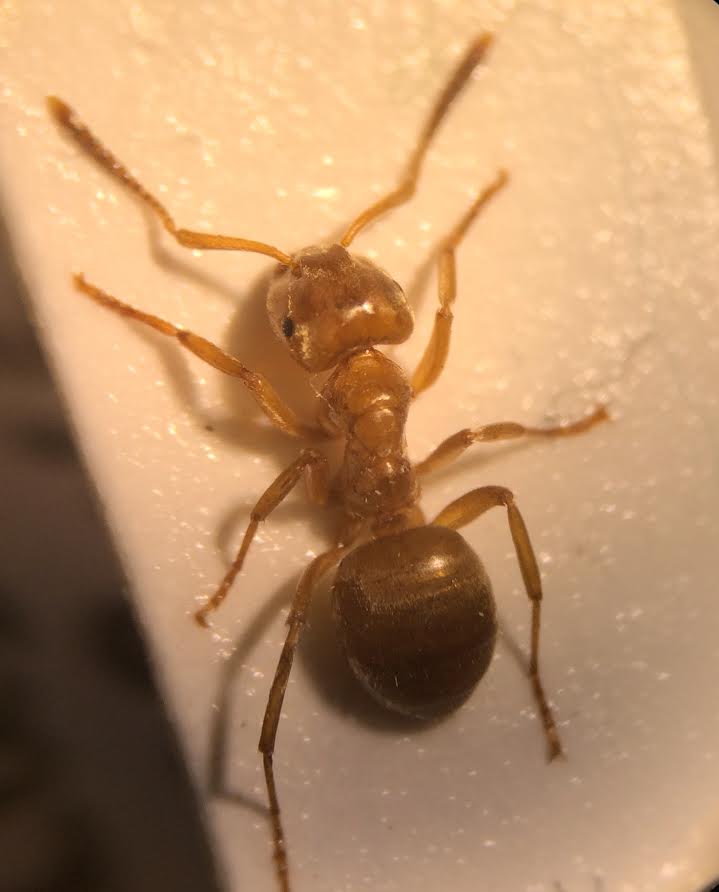 One thought on “Highlights of the Lizard”